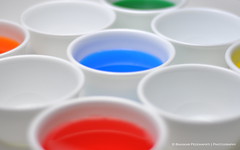 Transitions in life, as in art, don’t get the attention they deserve.

Maybe that’s because they are transient states, in-between bits we must get through to get to the nitty-gritty.

When we think back on our lives, we tend to jump from accomplishment to accomplishment, failure to failure, or any combination of the two, leapfrogging over the small transitions that opened the gates in the first place.

Yet, stories rely on transitions. Transitions are the precursors to events. Handled badly, they make the episodes in a story appear unintentionally jagged and disconnected.

Here are three techniques, chosen from a basket of others, that may help alleviate this common problem – repetition, continuity, contrast.

1. Transition by repetition. A word, action, or response is repeated in consecutive scenes.

In Final Destination 5, a detective interrogates several suspects. To avoid lengthy and superfluous repetition, the detective asks a question in one scene which is then answered by different characters in consecutive scenes.

2. Transition by continuity. This technique can help bridge events separated by a small or large gap in time and space,

In 2001, A Space Odyssey, Kubrick famously jump-cuts from a bone being thrown up in the air, to a space station floating in space. Both bone and space station are tools indicative of man’s development, but are separated by a span of millions of years. The visual link between the two shots, reinforced by the continuity of image size and movement is so strong that it allows us to make the transition in an instant.

In a similar vain, a character could begin a sentence in one scene while someone else completes it in another.

3. Transition through contrasting words or actions. Here, the expectations created at the end of a scene are immediately reversed in the one following it.

For example, imagine a scene in which your character, sword raised high, motivates his troops by anticipating a crushing victory over the enemy, followed by a scene where the same character stands chained to a dungeon wall.

Use repetition, continuity, or contrast to create effective transitions between scenes.

If you enjoyed this post, kindly share it with others. If you have a suggestion for a future one, please leave a comment and let’s get chatting. You may subscribe to this blog by clicking on the “subscribe” or “profile” link on the bottom right-hand side of this article. I post new material every Monday