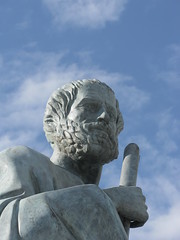 At the core of most memorable stories lies a theme with a strong ethical or moral premise.

In a very real sense, a story is about proving the theme by tracking the conflict that ensues between the hero and his nemesis, both of whom represent opposing values. In simple terms, good guys finish first, or last, depending on the outcome of that conflict.

But does this then mean that some stories are not ethical or moral? Is the nemesis’ winning of the fight, proof that unethical and immoral behaviour can triumph?

Biblical tales, for example, are clearly moral – Noah, Cleopatra, The Ten Commandments. As are modern stories, such as Braveheart, The Firm, Gladiator, Oblivion, Edge of Tomorrow, and countless others. These tales have at their core a moral premise that states that if the hero does the right thing, he will eventually achieve the goal, carry the day, save the world, even if it sometimes means that he has to sacrifice himself to do it.

But what about less obvious examples? Seven? Fight Club? Inception? Oceans 11,12,13? in what sense do these stories espouse ethical or moral values?

This bothered me quite a bit because, deep down, I felt that all great stories promote the best in us rather than the worst. Yet, something rang true about these latter stories. I felt a resonance and verisimilitude in them that I normally associated with great tales.

Then, during one of my classes on story-telling, it struck me: Most stories are indeed moral and ethical, with one proviso: In some, the moral or ethical judgment falls outside the world of the story itself — it is made by an audience or reader based on received cultural, social, and religious values.

Stories in which the villain gets away with it, spreading death and mayhem in his wake, may appear to show that malice, slyness, and cold-blooded determination lead to victory, but few of us would applaud his actions.

A horror story, in which, let’s say, demons succeed in taking over the world, is not necessarily a celebration of evil overcoming good. Rather, it is a warning: If the hero fails to stop evil, this is the result – a horrific world overrun by demons.

The characters within such a story may even celebrate this fact, but audiences, as a whole, won’t, since they bring their own moral and ethical systems to bare upon the tale.

Paradoxically, then, good will always rise above evil even when it seems defeated.

Most stories invoke an ethical and moral foundation, even those that ostensibly seem not to.

2 thoughts on “How Moral is your Story?”